Transistion to democracy: the Spanish experience

The Ambassador of Spain in Estonia Dña. Teresa Orjales Vidal, will give a talk about the Spanish transition to democracy after the death of Franco in 1975. During this process, Spain left behind a dictatorship in order to transform into a democratic State regulated by a Constitution suitable for a democracy governed according to higher law.

The years of profound reforms to establish a democracy would not have been possible without the work of the responsible politicians and the Crown of the time, but above all, without the support of the Spanish people.

The talk will be in English.
Admission free!

Register on Hispaania Maja homepage and we’ll see you in March!
http://www.hispaaniamaja.ee/iberofest-40-aastat/ 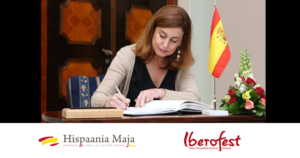